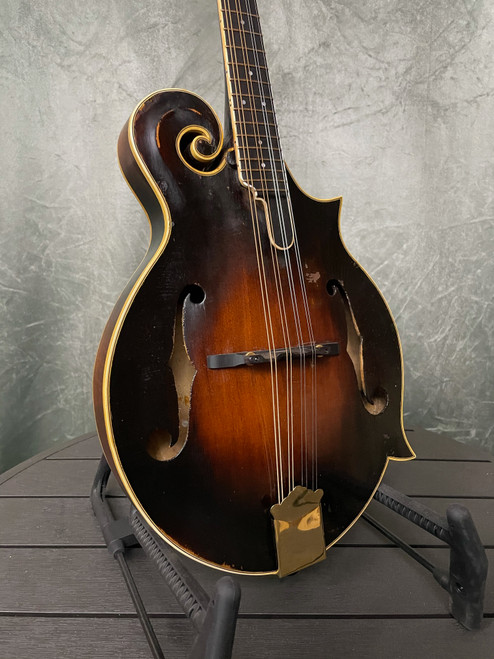 1977 Ferrington F-style. I wasn't particularly aware of who Danny Ferrington was until a customer of ours brought this in. Here's some info:

A bit about Danny Ferrington: He started building instruments as an apprentice to Randy Wood, back when Randy was in Nashville. I believe his shop was called “The Picking Parlor”. Danny built this mando from F5 plans Loar plans that everyone was using back then. He built it as a special order for my friend and former bandmate, Peter Ostroushko. If you shine your worklight in through a sound hole, and look to the left, you will Danny’s name, #4 (his fourth mando), and the exact date, which was some time in October 1977. Peter didn’t play it that much and loaned to a friend, but I first heard that mando way back then when Peter first got it, and I loved the tone, and playability. Peter sold it to a mutual friend and in the late 80’s I bought it from him.

He left Nashville in the late 70’s and moved to Santa Monica, where he, for some reason, ended up renting a room from Linda Ronstadt. From the connection with her, he met lots of rock stars and has made instruments for several of them including Elvis Costello. I had never met Danny, so in the 90’s I visited him at his shop. What a visit. He used to hang out with the likes of George Harrison, who would come into his shop and do little drawings for him. Danny organized a weekly jams with some of the local celebs, like Steve Martin. At the time I visited him he was making a mandolin for Tom Hanks. Tom got interested in mandos, because Danny made all the instruments the Coen Brothers used in the movie, “Ladykillers”. Danny is a real character with lots of great stories.